How to watch Tuesday's impeachment hearing

VI Connections, November 19, 2019November 19, 2019, Uncategorized, 0
In the morning, Jennifer Williams, an aide to Vice President Mike Pence and a career foreign service officer, and Lt. Col. Alexander Vindman, the National Security Council’s top Ukraine expert, will testify first. In the afternoon at a separate hearing, former National Security Council official Tim Morrison and former special envoy to Ukraine Kurt Volker will testify.
All four of these witnesses have already testified for impeachment investigators behind closed doors in recent weeks, but Tuesday’s hearings will be the first time many Americans will hear from them. Here’s how to watch:

What time does the hearings start?

At 9 a.m. ET, on Tuesday, November 19, the House Intelligence Committee hearing will be gaveled in for the hearing featuring Vindman and Williams.
At 2:30 p.m. ET, the committee is scheduled to start its second hearing with Morrison and Volker — though that is contingent on the first hearing wrapping up on time.

How can I watch the hearing?

CNN’s coverage of the public impeachment hearing for President Donald Trump before the House Intelligence Committee will air with instant analysis on CNN, CNN International and CNN en Español, and streamed live in its entirety on CNN.com’s desktop and mobile homepages, as well as across mobile devices via CNN’s apps for iOS and Android.

What is the hearing’s schedule and format?

The hearing on Tuesday is expected to follow a format similar to the two previous public hearings.
Rep. Adam Schiff, a Democrat from California and the committee’s chairman, and Rep. Devin Nunes, the top Republican on the panel, will start the hearing with their opening statements.
The witnesses will then be sworn in and get to deliver their opening statements.
Schiff and Nunes are expected to cede part of their time to Daniel Goldman, the panel’s director of investigations, and Steve Castor, the House Oversight Committee GOP counsel.
Additional rounds of questioning are possible. Each lawmaker on the committee will then get five minutes to ask the witnesses questions.

Who is Jennifer Williams?

Williams is a State Department employee who is detailed to Pence’s office and a career foreign service officer.
During a closed-door deposition earlier this month, Williams told lawmakers she was in the White House Situation Room listening to Trump’s July 25 phone call with Ukrainian President Volodymyr Zelensky in real time and reviewed a transcript of Trump’s April call prior to Pence’s own April call with Zelensky. Williams also listened to a second call between Pence and Zelensky, which took place on September 18 after the hold on security assistance was lifted. 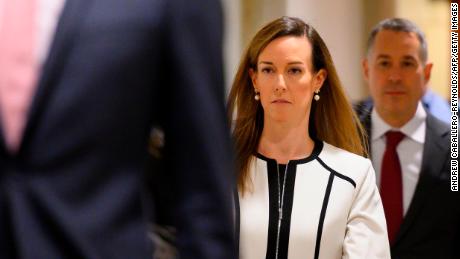 Williams testified that Trump’s request for specific investigations struck her as “unusual and inappropriate” and “shed some light on possible other motivations” for Trump’s decision to freeze security aid to Ukraine.
After Williams’ testimony become public on Saturday, Trump lashed out at Williams on Twitter, resurfacing Sunday an unfounded accusation he has raised against other officials who have testified in the probe, characterizing Williams as a Never Trumper and associating her with other “Never Trumpers” and urging Williams to “read BOTH transcripts of the presidential calls.”

Who is Lt. Col. Alexander Vindman?

Vindman, a decorated veteran who was born in Ukraine, is the White House’s top Ukraine expert.
He told the House Intelligence Committee last month during a more than 10-hour closed-door deposition that he reported concerns about Trump’s July 25 call with the leader of Ukraine to the top National Security Council lawyer within hours, and said some of the changes he tried to make to the since-published transcript were left out, though he didn’t say why. Vindman also told lawmakers that later, he was told not to discuss the call with anyone else.
Vindman was awarded a Purple Heart for his service in Iraq after being wounded in an IED attack and still carries shrapnel from the attack in his body, according to a source close to him.

Who is Kurt Volker?

Volker, the former US special envoy to Ukraine, resigned from his post one day after the release of a whistleblower report alleging a coverup by the White House of a call between Trump and Ukraine’s President.
Volker told lawmakers last month that the Ukrainians had asked to be put in touch with Trump’s personal lawyer Rudy Giuliani — whose efforts have been described by other witnesses as a shadow foreign policy outside of State Department channels — because they believed “that information flow would reach the President.” He said he had been surprised and troubled by what was said on the July 25 call between Trump and Zelensky.
Still, Volker’s testimony also provided Trump and his allies with fodder, as they’ve been pushing for it to be released publicly. Volker told lawmakers that he didn’t know about any “quid pro quo” linking US military assistance to the announcement of Ukrainian investigations into Biden and the Democrats.

Who is Tim Morrison?

Tim Morrison, a former National Security Council official who specialized in Russia and Europe, testified last month that he had heard from US Ambassador to EU Gordon Sondland that US aid to Ukraine was conditioned on the country announcing an investigation into former Vice President Joe Biden and his son Hunter Biden.
Morrison pointed the finger at Sondland for having “chiefly led” the irregular diplomatic process, which incorporated Giuliani. Morrison said this irregular channel differed from the “normal process” that the US government uses for foreign policy.
Morrison, like Vindman, was on the July 25 phone call between Trump and Zelensky. After the call took place, Morrison informed Bill Taylor, the top US diplomat in Ukraine, that it “could have gone better.”