VI Connections, December 23, 2019December 23, 2019, Uncategorized, 0
You’ve probably heard the question, and his campaign team certainly has, if they haven’t asked it of themselves. It has inspired an untold number of think pieces and perhaps come to define Booker’s bid for president.
“Why do you think his campaign is gaining traction and yours hasn’t?” the man in Sioux City asked.
In this case, the other candidate was South Bend, Indiana, Mayor Pete Buttigieg, who has bypassed more experienced and well-known rivals to seize the lead in Iowa. But it could have been anyone, really: Sen. Amy Klobuchar, perhaps, or Sen. Elizabeth Warren. Even entrepreneur Andrew Yang.
Those candidates — along with former Vice President Joe Biden, Sen. Bernie Sanders, and businessman Tom Steyer — shared a stage that week in Los Angeles, the site of the sixth Democratic primary debate. For the first time, however, Booker wasn’t among them. 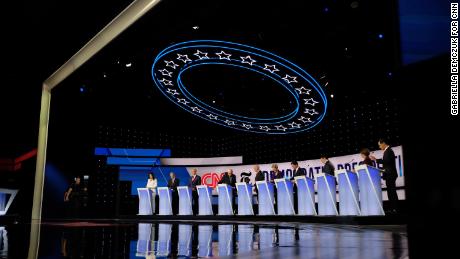 Instead, having failed to meet the polling threshold to qualify, he touched down in Iowa on Thursday for the first of five days of campaign stops, four of which would be spent crisscrossing the state by bus. If Booker couldn’t fight for the Democratic nomination on the debate stage, he would do it here, one town at a time.
The bus gleamed in the parking lot of his Urbandale office, freshly wrapped in the campaign’s signature black and red and white and bright comic-book blue, symbolizing a new phase for what has been an austere campaign. Booker’s first television ad aired Thursday during the debate; Buttigieg, for example, has spent or reserved $6.7 million on TV in Iowa alone. And while other, better funded candidates have been zooming around Iowa for months in flashy branded buses, Booker has settled for more humble transportation in large vans or RVs.
But now he had a flashy bus of his own, the left side crowded with colorful stickers paying tribute to grassroots supporters who had helped pay for it.
On Friday morning, Booker’s staff filmed him emerging from the campaign office to glimpse the “Bookmobile,” as he would jokingly call it later. He clapped and grinned widely, channeling a child on Christmas morning, although he had seen the bus the previous night and taped a TV hit in front of it before dawn.
The moment might have been an ideal picture of a campaign at full speed, gunning for Iowa in the final weeks before the caucuses, but for one smudge: the debate that Booker wasn’t a part of, and the unanswered question of whether he would stand a chance without it.
Booker and his team took pains during the debate to show they were thriving without it. But if they wanted to change the subject, voters did not. As he slid into a chair to phone-bank among campaign volunteers and organizers, Booker’s first call was to a woman named Suzette, who expressed her disappointment that the New Jersey senator was not on stage in Los Angeles. Like many Iowans, she had not yet made up her mind about whom she would support; but she said Booker was at the top of her list.
It was more of the same as Booker hit the road the next morning. At a bowling alley in Adel, Iowa, Maribeth Arentsen felt moved to share her frustration with Booker over the debate process.
“His passion impacted me,” Arentsen explained, adding that she had never spoken up at a campaign event before. “We need somebody who can really inspire people.”
She marveled, meanwhile, that a candidate as qualified as Booker might not get a full hearing from voters. “He’s not just a mayor from South Bend who hasn’t done anything,” she said.
On Friday, however, Booker’s return to the stage became even less likely, with the Democratic National Committee announcing higher polling and donor thresholds for the January debate in Iowa. Although Booker has exceeded the required number of donors, he would need to earn 5% in four polls, or 7% in two early state polls. He has not hit 5% in a national poll since March.
Even if Booker were to surge in the next few weeks, we might not see it. The rate of polling has slowed to a crawl during the holidays, especially in the early states where Booker has focused his resources. “It’s awful,” Booker remarked to reporters on the bus, as it hurtled down the highway from Adel to Fort Dodge.
But he also stressed that he believes it doesn’t matter — a pronounced shift.
“If you had told me back in June that we were going to miss a debate stage, I would have said, that would end the campaign,” Booker said. “Now, it’s almost comical to me, to be frank.”
“I really do feel that we are going to upset in Iowa,” he added. “Debate stage or not.”
One reason this doesn’t look like the end of the road for Booker is because he’s still winning endorsements on the ground, a clear sign that Iowans, at least, see a campaign with fuel left in the tank.
Bryce Smith, chair of the Dallas County Democratic Party, had recently narrowed his list of top candidates down to Buttigieg and Booker. Then, a couple weeks ago, he went to see Booker in person during one of his Iowa stops.
After Booker spoke, “I was darn near in tears,” Smith said. He announced his support for Booker on Friday in Adel. Penny Rosfjord, a key Iowa Democratic activist who previously endorsed Sen. Kamala Harris, helped introduce Booker in Sioux City on Friday. She’s now seriously considering throwing her support behind the New Jersey Democrat, she said, with one other candidate whom she declined to name also under consideration.
And she certainly isn’t counting Booker out.
“I think he’s right about the polls,” Rosfjord said. “Iowans will make this decision.”
But the candidates who are often mentioned in the same breath as Booker on the ground in Iowa — frequently Warren, Klobuchar and Buttigieg — have also been showering the state with attention and gaining more traction. This weekend, Klobuchar was also rolling around the state in her campaign’s bright green bus. Buttigieig, meanwhile, drew a large crowd for an event with the actor Kevin Costner, of “Field of Dreams” fame, who announced his support for the mayor. 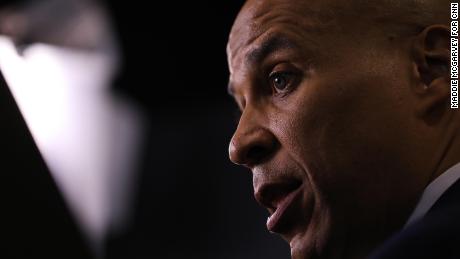 Back on the bus, Booker equated his challenge in Iowa with his most memorable football game as a college athlete, when Booker’s then-unranked Stanford toppled powerful Notre Dame at home.
“Who is Notre Dame in the context of this primary?” reporters on the bus wondered. Booker wouldn’t go there, but he didn’t have to. Of course it was the “talented young man” from South Bend.
That was how Booker would describe Buttigieg later, in Sioux City. Which brings us back to The Question.
Booker did not try to explain why he has “languished” — often the verb of choice in media reports — in the low single-digits or why he might not make another debate stage in this primary.
“What our campaign talks about all the time is, we started this campaign with a message, and we’ve been driving that message the whole campaign,” Booker said.
“I can’t speak to Pete Buttigieg’s campaign,” he added. “I know this for a fact: I’m the best person in the field to inspire the coalitions we need to win.”
But what if we’ve been asking the wrong question?
Booker decided a long time ago what campaign he was going to run, and very little has changed since he launched his candidacy February 1.
“I’m running for spiritual reasons,” Booker stressed in Sioux City. “Not for religious reasons, but the values of our country.” As president, he added, he would see his role as that of “a pastor of sorts (to) try to lead us to a moral high ground as a people.”
Why he hasn’t surged, or will he ever? He believes that’s a question for everyone else — and, first, for Iowa.
Share this
0 likes
Related Articles