Mueller's first comments since his appointment as special counsel were remarkable

VI Connections, June 26, 2019June 26, 2019, Uncategorized, 0
In Mueller’s first public comments on the investigation since he was appointed special counsel two years ago, he emphasized that Justice Department guidelines did not allow him to charge a sitting President, and as a result, his office did not determine whether Trump had committed obstruction of justice.
“If we had had confidence that the President clearly did not commit a crime, we would have said so,” Mueller said. “We did not, however, make a determination as to whether the President did commit a crime.”
As he announced he was closing the special counsel’s office and resigning from the Justice Department, Mueller delivered a road map of how the investigation played out and the possible role that Congress could play in holding Trump accountable. Mueller highlighted how the “Constitution requires a process other than” the criminal justice system to hold officeholders accountable, a clear signal that his obstruction investigation into Trump could be picked up by Congress. 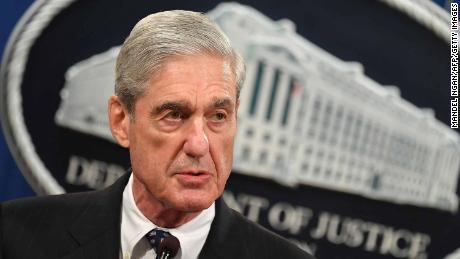 House Judiciary Chairman Jerry Nadler, whose committee would lead impeachment proceedings, said in a statement that Congress should now respond to Mueller’s findings.
“Given that special counsel Mueller was unable to pursue criminal charges against the President, it falls to Congress to respond to the crimes, lies and other wrongdoing of President Trump — and we will do so,” Nadler said.
“At this point all options are on the table, and nothing should be ruled out,” the New York Democrat told reporters about a possible impeachment inquiry.
Democratic presidential candidates immediately called for the House to begin an impeachment inquiry.
“Bob Mueller was essentially referring impeachment to the United States Congress,” said California Sen. Kamala Harris.
“Robert Mueller’s statement makes it clear: Congress has a legal and moral obligation to begin impeachment proceedings immediately,” tweeted Sen. Cory Booker, a New Jersey Democrat who previously had taken a far more cautious stand on impeachment.
House Speaker Nancy Pelosi, who has thus far resisted calls to begin an impeachment inquiry, said at an event Wednesday that the option remained on the table, but she also emphasized how it’s still a minority of House Democrats who back impeachment at this point.
“Many constituents want to impeach the President, but we want to do what is right and what gets results,” Pelosi said in an interview at the Commonwealth Club in San Francisco. “We are investigating and we are litigating, and we are going to as we go down the path and make a decision based on the strongest possible case to get the best results for the American people.”
Mueller’s public statement did not appear to sway Trump, who has claimed the investigation exonerated him.
“Nothing changes from the Mueller Report. There was insufficient evidence and therefore, in our Country, a person is innocent. The case is closed! Thank you,” Trump tweeted minutes after Mueller’s statement ended.
Later Wednesday, Trump added via tweet: “How do you impeach a Republican President for a crime that was committed by Democrats? WITCH-HUNT!”
The prospect of House Democrats launching an impeachment inquiry into the President, which has been simmering in recent weeks amid the White House’s stonewalling of Democratic congressional investigations, is not prompting the President to back down. A source familiar with Trump’s thinking said the President’s view on impeachment is “let’s do it. This fight will end up on our side. American people will see this as a scam. It is.”

‘The report is my testimony’

The special counsel highlighted what he wanted the public to take away from the 448-page report he issued on the investigation into Russian election interference and possible obstruction of justice.
House Democrats have been eager to have Mueller testify publicly, but his comments made clear he does not plan to do so.
“I hope and expect this will be the only time I will speak to you in this manner,” he said.
“It’s important the office’s written work speaks for itself,” Mueller said about his report, which was delivered in March to Attorney General William Barr. “The report is my testimony.”
It’s not yet clear whether Democrats will try to force the issue to bring Mueller before Congress. Asked Wednesday if he would subpoena Mueller for his testimony, Nadler said: “Mr. Mueller told us a lot of what we need to hear today.”
But House Intelligence Chairman Adam Schiff, who is seeking to have Mueller testify behind closed doors, said that he still wanted Mueller to appear.
“While I understand his reluctance to answer hypotheticals or deviate from the carefully worded conclusions he drew on his charging decisions, there are, nevertheless, a great many questions he can answer that go beyond the report, including any counterintelligence issues and classified matters that were not addressed in his findings,” Schiff said in a statement.
Pelosi also said that she backed Mueller testifying, though none of the Democrats raised the prospect of a subpoena on Wednesday.
“Yes, I think it would be useful for him to testify before Congress,” Pelosi told reporters.
For congressional Republicans, Mueller’s statement did not change their argument that it was time for Congress to move on.
“Today’s statement by Mr. Mueller reinforces the findings of his report. And as for me, the case is over,” said Senate Judiciary Chairman Lindsey Graham. “Mr. Mueller has decided to move on and let the report speak for itself. Congress should follow his lead.”
Mueller’s statement, which was delivered amid political disputes about the findings of Mueller’s investigation — particularly regarding whether Trump obstructed justice — emphasized that the special counsel’s indictments revealed how the Russians “launched a concerted attack on our political system.”
“There were multiple, systematic efforts to interfere in our election. And that allegation deserves the attention of every American,” Mueller said.
The Justice Department released a redacted version of the special counsel’s report last month. The report detailed numerous cases in which Trump asked his aides to take actions that would have obstructed the investigation, but stated they were unsuccessful because the aides refused his orders.
The report also says that the investigation into possible collusion found that members of the Trump campaign knew they would benefit from Russia’s illegal actions to influence the election, but didn’t take criminal steps to help.
RELATED: Read and search the full Mueller report

Charging Trump was “not an option” because Justice Department regulations prohibit charging a sitting president with a crime, Mueller said. His office was “bound by that policy.”
“It would be unfair to potentially accuse somebody of a crime when there can be no court resolution of an actual charge,” he said.
Mueller called the subject of his investigation “of paramount importance,” and said that obstructing an investigation “strikes at the core of the government’s effort to find the truth and hold wrongdoers accountable.”
The White House got a heads up Tuesday night that Mueller would likely deliver a statement on Wednesday about the Mueller investigation, according to a senior administration official.
Barr also was given advance notice, according to a source familiar with the plans, and Nadler was also notified, a committee spokesman said.
The Justice Department and Office of Special Counsel issued a joint statement Wednesday evening saying “there is no conflict” between Barr’s and Mueller’s statements regarding the role the Office of Legal Counsel opinion played in Mueller’s treatment of obstruction in his report. Mueller’s public statement earlier Wednesday, however, presented a stark contrast to the attorney general regarding the significance of the Justice Department guidelines against indicting a president.

Trump, citing a letter from Barr to Congress about Mueller’s conclusions, has previously said the investigation provided a “complete and total exoneration.”
But Mueller’s report only said the investigation “did not establish that members of the Trump campaign conspired or coordinated with the Russian government,” and Mueller expressed concerns in a letter to Barr that the attorney general’s letter summarizing his findings didn’t fully capture his report, a source with knowledge of the letter has told CNN.
Trump has wavered publicly in recent weeks on the prospect of Mueller’s testimony before Congress as his administration has clashed sharply with lawmakers over demands for documents and testimony.
Asked earlier in May, the President said, “I don’t know. That’s up to our attorney general, who I think has done a fantastic job.” 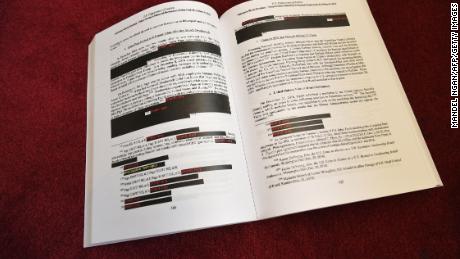 Days later, Trump reversed course and said Mueller “should not testify” as the President resurfaced his regular complaints about the Mueller investigation, before switching back again and saying the decision would be up to “our very great attorney general.”
This story has been updated.