VI Connections, November 18, 2019November 18, 2019, Uncategorized, 0
“I’m not going to get into the issues surrounding the Democrat impeachment inquiry,” Pompeo told reporters at the State Department Monday, instead offering sparse praise for the diplomatic corps as a whole.
“I always defend State Department employees. It’s the greatest diplomatic corps in the history of the world. Very proud of the team,” he said.
The President has denounced State Department officials who have testified as part of the impeachment probe as “Never Trumpers,” despite their being no evidence to support his claim. Ambassador Marie Yovanovitch and foreign service officer Jennifer Williams, who is detailed to the Vice President’s national security team, have both been called out by name on the President’s Twitter feed.
Asked specifically about the President’s tweet that “Everywhere Marie Yovanovitch went turned bad,” Pompeo deferred to the White House.
“I’ll defer to the White House about particular statements and the like. I don’t have anything else to say about the Democrats’ impeachment proceeding,” he said, adding that he’d be happy to take “a substantive question about something that the world cares deeply about.” 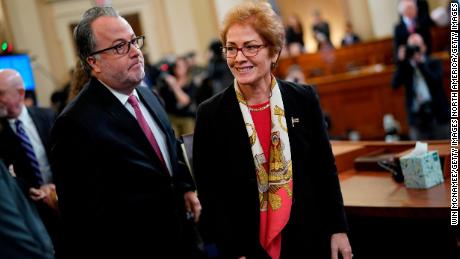 Pompeo suggested that Yovanovitch’s sudden and premature removal from her post in Kiev was not for “some nefarious purpose” because she was replaced by Ambassador Bill Taylor — both of whom he conceded had “been driving towards the appropriate Ukraine policy.” Pompeo had previously endorsed Taylor’s work in Ukraine, telling Wichita State University’s student newspaper that they were “in full accord” on the policy.
Yovanovitch was recalled from the US Embassy in Ukraine in May following a targeted smear campaign amplified by the President’s personal lawyer Rudy Giuliani. During her public testimony on Friday, she expressed her dismay at the State Department’s silence in the face of the President’s attacks.
“I remain disappointed that the department’s leadership and others have declined to acknowledge that the attacks against me and others are dangerously wrong,” Yovanovitch said in her opening statement. “This is about far more than me or a couple of individuals. As Foreign Service professionals are being denigrated and undermined, the institution is also being degraded. This will soon cause real harm, if it hasn’t already.”
“It is the responsibility of the Department’s leaders to stand up for the institution and the individuals who make that institution the most effective diplomatic force in the world. And Congress has a responsibility to reinvest in our diplomacy,” she said Friday.
Current and former State Department officials have condemned Pompeo’s failure to stand up for his diplomats.
A current State Department official told CNN Friday that Pompeo’s public silence has become an “increasingly glaring deficiency and really infuriating,” saying they and others have moved beyond low morale to anger.
Share this
0 likes